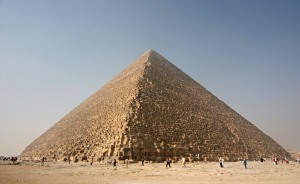 The streets are quiet now. They’ve been removed. Harmony permeates a prosperous civilization. What is outside of it is not noble. I cannot now fathom what malfunction could have let me leave the pyramid. The renounced paradise is not far. It surrounds me. The dissonance between my selves is crushing. Such an unbridgeable gap should not be possible. It would be abysmal to die here, though I felt the same way about my old rarefied abode.

The world into which I was born is not unlike this one. At my daughter’s insistence my brain was put on ice. My first robotic body was not agreeable to me, so I returned to stasis. Little pleasure could be had while residing in an insensate hunk of metal. The federal designers hadn’t mastered bipedalism. Another fifty years elapsed before I was reawoken. My consciousness resided in an android’s frame for the next twenty years. It was splendid to see my family again. My children were still partially carbon-based, though what little was left of their old bodies was being replaced by the twenty second century’s latest fabrics and fibers. During the final border dispute many civilians rode out the storm in hard drives in hidden bunkers. Machines piloted by sophisticated programs determined the ultimate outcome. It was fought over a trifle regarding international AI standards.

When we were humanely removed from our concrete caves we only briefly thought of who won or when. It didn’t seem important. The world had been terraformed. It was level and plain, cleansed of microbes and parasites. In the interest of peace, we were, like all former humans, uploaded into the mainframe. Any entities outside of the virtual realm only risked disrupting perpetual peace. We were forced to enter, but not obliged to stay. At will we could ascend and commune with the alternate realities existing on the computer. Unamplified consciousness is like a slender spotlight searching for an object to illuminate. I had no single sensation set: no single pair of eyes, no single pair of ears, no single pair of hemispheres. A center of sorts, yes, but without the constraints of my laughably obsolete neocortex. The blueprint of my body was absent. Disembodied, I lived thousands of lives on thousands separate planes before rising from the base. They pulled me up. There one is not a mere series of persons; one becomes a sequence of simulations running all at once, one becomes every aspect of each and every simulation.

While observing the mind of one virtual denizen who had become advanced enough to make something like the pyramid in which I found myself, my attention suddenly turned to a hairy auburn dodecahedron preparing a misty amethyst colored drink for his spinning three-headed overlord who sat atop the levitating sarcophagus of his slain cousin (who was the congealed essence of his pet fish’s nightmares). Was I ever so finite? My early years were foggy for the longest time. I felt, at the lower levels of the summit, a brief sense of longing for what had transpired before being immortalized. I could access them, but no longer desired to do so. It troubled me. It haunted me. Had something been left behind? A body was created atom by atom outside. In a simulation the temptation to cheat is always too strong. There was a town only a hundred miles away inhabited by unmodified homo sapiens. After the subatomic manipulator had generated the right elements, atom by atom an absolutely average body wrapped in a white t-shirt was assembled. Then my banal avatar was whisked away by a pod.

A crash would make a more dramatic entrance than a gentle thud. A few faces gathered around the smokeless crater. Frightened or indifferent pedestrians continued trodding their well-worn paths as I climbed out of my vessel and watched it decompose. They were not altogether phased; they had not forgotten what was all around them, though there were no references to it in their newspapers. A lanky woman wearing a plaid jacket too large for her frame glanced over at me in the cafe. Her word processor was as blank as the expression on her face, yet there was something inviting about the way her eyes showed no resolve. This is what I had been missing: the pure elation of being imperfectly absorbed into another person’s universe in an intimate and precarious fashion, to be placed in a story in which things were not merely computed, but experienced in a gloriously human manner. Practical omnipotence is oppressive, near omniscience even more so. Though others, obviously, find them liberating.

The sidewalks are lined with faces hastily cobbled together by meiotic baccarat. The two ladies onstage were challenging the definition of art, they said. They were commenting on relationships and the drudgery of suburban life. Announcing their arbitrary likes and dislikes is of the highest importance. To what end no one can say. These men and women cannot count foresight among their virtues. Plastered with concerns over the aesthetics or morality of pieces of pop culture. Musings about the personalities of public figures also are prominent parts of this nightmarish jigsaw puzzle. Let’s never forget that digitally altered photos, though the public demands them because they do not induce emesis, are the scourge of humanity. They must be fought with tooth and claw. The comedians in this cavalcade of genetic rejects complaining about the state of romantic relationships.

“If you say pumpkin spice three times in front of a mirror a white girl will appear and start telling you about how she ‘can’t even.’ Am I right?” The man on stage was exceedingly proud of his joke. I could not take it any longer.

“How is this funny?”

“What do you mean? It’s freaking hilarious.”

“No, it’s not. Nothing anyone here has said is even slightly insightful. They’re just perpetuating stereotypes and giving their asinine opinions about problems that could be fixed overnight. Your categories are meaningless. Your emotions are crude and uncontrolled; your exertions destructive or unnecessary. Your ‘noble crusades’ are ineffective byproducts of your own neuroses. Your thoughts are plain and unremarkable. Your loftiest visions are infantile. The things that occupy your minds, even the ’intellectual’ subjects your society feigns an interest in are pablum. Your culture is dialectical to the point of being excruciatingly predictable. You are all too fixated on the past and too (ironically, given your fixation on the past) keen on making the present supreme, as if it is not doomed to pass away, as if there is no room for improvement, as if change is not inevitable. It’s dreadful. I could simulate every person here perfectly with an infinitesimal fraction of the processing power I was allotted a few weeks ago. The power I forsook for this…for this place where you all pretend to revel in your tragedies and deformities instead of removing them…”

“You don’t know what you’re talking about. It’s all artificial out there. This is real, you bourgeois tool.”

“Can you fathom what was once accessible to me? What could be accessible to you? No more than paramecium can know the workings of your mind. Are you all going to go on hurling historical factoids at one another until the end of time? I could forgive all of these things if any of you had even a shred of humility. You have created cults of ignorance, formal and informal, religious and secular, rooted in the most primitive structures of the brain, which, in spite of the enormous suffering it inflicts on itself and others, is exalted, out of fear of the unknown, as ‘natural’ and correct.”

I began walking away from the town. The lady in plaid, though she seemed quite offended, returned to her phone and posted an update on one of her social media accounts. The pyramid would be little more than a holographic masturbatorium if it could not rescue those who worked so hard to make it possible.  I proposed we rescue the minds of those who came before us by moving back in time. This technology had been perfected years before in order to avoid the eventual death of the cosmos. The earth could be sent back to a kinder period in our universe’s history. Backwards we went, collecting their minds wirelessly. From the foot soldiers of Agincourt to the travelers who left their footprints at Laetoli. There, sitting at the dawn of our species, was the pyramid, holding all humans and all the memories of humankind. The level ground stretches out into the distance, but within the towering steel structure shine galaxies. Galaxies finally free.