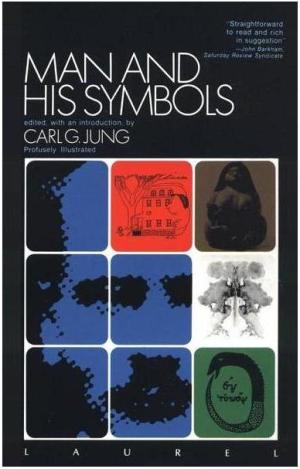 Man and His Symbols is a compilation of essays by Jung and others on the interpretation of dreams, behavior and myths. It follows the thread one finds throughout Dr. Jung’s corpus: fables and fairy tales, though they may appear infantile or simply bizarre, are not merely primitive explanations for natural phenomena, but deeply meaningful parts of the unconscious.

“Since dreams produce different scenes and images every night, people who are not careful observers will probably be unaware of any pattern. But if one watches one’s own dreams over a period of years and studies the entire sequence, one will see that certain contents emerge, disappear, and then turn up again. Many people even dream repeatedly of the same figures, landscapes, or situations; and if one follows these through a whole series, one will see that they change slowly but perceptibly.”

“Our dream life allows us to have a look at these subliminal perceptions and shows us that they have an effect upon us.”

A controversial assertion by one of the contributors:

“Practical experience and accurate observation show that one cannot influence one’s own dreams. There are people, it is true, who assert that they can influence them. But if you look into their dream material, you find that they do only what I do with my disobedient dog: I order him to do those things I notice he wants to do anyhow, so that I can preserve my illusion of authority.”

“But the fact that his unconscious for its own purposes has chosen one of these specific images— it may be the key, the stick, or the battering ram— is also of major significance. The real task is to understand why the key has been preferred to the stick, or the stick to the ram.”

“It is true that there are dreams and single symbols (I should prefer to call them “motifs”) that are typical and often occur. Among such motifs are falling, flying, being persecuted by dangerous animals or hostile men, being insufficiently or absurdly clothed in public places, being in a hurry or lost in a milling crowd, fighting with useless weapons or being wholly defenseless, running hard yet getting nowhere.”

“When an individual makes an attempt to see his shadow, he becomes aware of (and often ashamed of) those qualities and impulses he denies in himself but can plainly see in other people—such things as egotism, mental laziness, and sloppiness; unreal fantasies, schemes, and plots; carelessness and cowardice; inordinate love of money and possessions— in short, all the little sins about which he might previously have told himself : ‘That doesn’t matter; nobody will notice it, and in any case other people do it too.’  If you feel an overwhelming rage coming up in you when a friend reproaches you about a fault, you can be fairly sure that at this point you will find a part of your shadow…”

“But what can you say if your own dreams—an inner judge in your own being— reproach you? That is the moment when the ego gets caught, and the result is usually embarrassed silence. Afterward the painful and lengthy work of self-education begins— a work, we might say, that is the psychological equivalent of the labors of Hercules. This unfortunate hero’s first task, you will remember , was to clean up in one day the Augean Stables, in which hundreds of cattle had dropped their dung for many decades— a task so enormous that the ordinary mortal would be overcome by discouragement at the mere thought of it.”

“Women who are of ‘fairy-like’ character especially attract such anima projections, because men can attribute almost anything to a creature who is so fascinatingly vague, and can thus proceed to weave fantasies around her. The projection of the anima in such a sudden and passionate form as a love affair can greatly disturb a man’s marriage and can lead to the so-called ‘human triangle,’ with its accompanying difficulties. A bearable solution to such a drama can be found only if the anima is recognized as an inner power.”

“Man today is painfully aware of the fact that neither his great religions nor his various philosophies seem to provide him with those powerful animating ideas that would give him the security he needs in face of the present condition of the world. I know what the Buddhists would say: Things would go right if people would only follow the ‘noble eightfold path’ of the Dharma (doctrine, law) and had true insight into the Self. The Christian tells us that if only people had faith in God, we should have a better world. The rationalist insists that if people were intelligent and reasonable, all our problems would be manageable. The trouble is that none of them manages to solve these problems himself.”

Regarding the dreams of a young girl who died shortly after the events took place:

“In the second dream, a motif appears that is definitely non-Christian and that contains a reversal of accepted values— for instance, pagan dances by men in heaven and good deeds by angels in hell. This symbol suggests a relativity of moral values. Where did the child find such a revolutionary notion, worthy of Nietzsche’s genius?

What is the compensatory meaning of these dreams, to which the little girl obviously attributed so much importance that she presented them to her father as a Christmas present?”

“I vividly recall the case of a professor who had had a sudden vision and thought he was insane. He came to see me in a state of complete panic. I simply took a 400 -year-old book from the shelf and showed him an old woodcut depicting his very vision. ‘There’s no reason for you to believe that you’re insane,’ I said to him. ‘They knew about your vision 400 years ago. Whereupon he sat down entirely deflated, but once more normal.”

“When I found the similar passage in Thus Spake Zarathustra, I was struck by its peculiar style, which was different from Nietzsche’s usual language. I was convinced that Nietzsche must also have seen the old book, though he made no reference to it. I wrote to his sister, who was still alive, and she confirmed that she and her brother had in fact read the book together when he was 11 years old. I think, from the context, it is inconceivable that Nietzsche had any idea that he was plagiarizing this story. I believe that fifty years later it had.”

“From a practical angle this factor reveals itself in that an individual who follows his dreams for a considerable time will find that they are often concerned with his relationships with other people. His dreams may warn him against trusting a certain person too much, or he may dream about a favorable and agreeable meeting with someone whom he may previously have never consciously noticed.” The Burning Giraffe by Salvador Dali

“If we look at surrealist pictures (like Salvador Dali’s The Burning Giraffe) with this in mind, we may feel the wealth of their fantasy and the overwhelming power of their unconscious imagery, but we realize the horror and the symbolism of the end of all things that speaks from many of them. The unconscious is pure nature , and, like nature, pours out its gifts in profusion.”

“To Franz Marc, abstraction offered a refuge from the evil and ugliness in this world. ‘Very early in life I felt that man was ugly . The animals seemed to be more lovely and pure, yet even among them I discovered so much that was revolting and hideous that my painting became more and more schematic and abstract.'”

“Even evil must not be a triumphant or degrading enemy, but a power collaborating in the whole.”

“If a young person is afraid of life and finds it hard to adjust to reality, he might prefer to dwell in his fantasies or to remain a child. In such a young person (especially if he is introverted) one can sometimes discover unexpected treasures in the unconscious, and by bringing them into consciousness strengthen his ego and give him the psychic energy he needs to grow into a mature person”