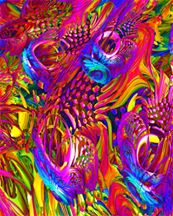 Imagine downloading a procedure and immediately acquiring the muscle memory and other “intuitive” nuances of the task. Think of how frustrating communication can be, particularly when an intention is misinterpreted. Now imagine transferring a thought or feeling without worrying about its meaning being lost as it travels from one brain to another. Thoughts and entire minds will become like mp3s. There is a deep and often thwarted desire to share, to be heard and to be recognized for what we want to be and, on a deeper level, to be accepted for what we are instead of the way we seem. It is through contact loneliness is alleviated and it is through sharing our own existences are validated—esse percepi est.

Whether or not existential independence is an ideal worth striving towards is outside of the bounds of this piece. It is wiser, I think, to focus on the reality of emotional interdependence than the ideal of a lone yogi basking in the nondualistic beauty of eternal bliss. Although it is quite possible advancements in neurotechnologies will make these states accessible to everyone.  There is a chasm between human beings, sometimes even between close friends. The steps taken to come to a conclusion are not always easy to express or altogether conscious. In other words, being able to send a thought to another person gives us the opportunity for deconstruction and to show other people our reasoning.This beautiful application is also frightening. The unconscious motivations behind our actions may be humiliating to us and repugnant to others. This means, initially at least, that telepathy will take place between people who already trust one another. At one point it was enough to own a computer. This in and of itself enhanced productivity. Later, however, one needed to connect to a network to remain productive and informed. Local networks made by institutions, families and friends will give rise to a global one.

Few things are as terrifying as renouncing one’s isolated self. Few things are as alien to us as the minds of others. The second sentence, I realize, is a bold assertion that touches upon some contentious issues in the philosophy of mind. I don’t think it is at all absurd to claim experiencing a few minutes in another person’s consciousness as an observer (or as that person) would be a thought-shattering experience. Even gaining access to a single “qualia” could be monumental. Intuition comes from experience. This is sometimes an unwanted price tag. Eventually it will be unecessary. Out of curiosity and a need to remain competitive a growing number of people will purchase interfaces that allow them to amplify their consciousness. Humans will likely need to upgrade their storage and processing capacities to go over all the contents, or even part of the contents, of another brain. Having an encyclopedia attached to one’s hippocampus is not enough. That will not provide understanding. An imbecile with direct access to all the knowledge in the cosmos is no more and no less adept at creative tasks than he is without his encyclopedia. Thus the packaging of thoughts in native mentalese can perhaps provide understanding as well as knowledge.

This Pandora opens several boxes. The growth of transparency and the loss of privacy are two intensifying concerns, yet one must wonder whether privacy will be needed in a civilization of empaths. Will there be a need to conceal ourselves from anyone in a society that puts compassion at the forefront of its values? Will technological telepathy create this sort of society or will measures need to be taken to guard against its misuse and abuse? Into whose hands should these devices fall? Thoughts are textured, colored, and subtle. Experiencing the thoughts of others give us a nearly infinite number of brushes and paints for our pallette. The vividness of a single experience can permanently alter our perception of the world. This means incoming and outgoing data would have to be secure, yet a system, however secure, is bound to have flaws and there are bound to be those who will want to exploit them.

It is likely mental objects and worlds will be created. These realms will be passageways to alternate realities. Television, books and video games can be immersive but all rely heavily on the receptivity of their target. These mentalese landscapes will not all be hyperrealistic. Most video games would be painfully boring if they were. You may want to be a roller coaster tycoon, but you may not want to negotiate with the candy supplier. Tremendous damage can be done if someone manages to insert data into a brain or otherwise compromises its operation. Psychic spies, counterspies and security experts will emerge, but also new creators. The existence of mind crimes will quickly drop, hopefully, as empathy becomes as powerful as avarice and self-pity. Makers unfettered by nothing but their own imaginations. The future is rapidly approaching. I hope things turn out for the best, but I can make no promises.