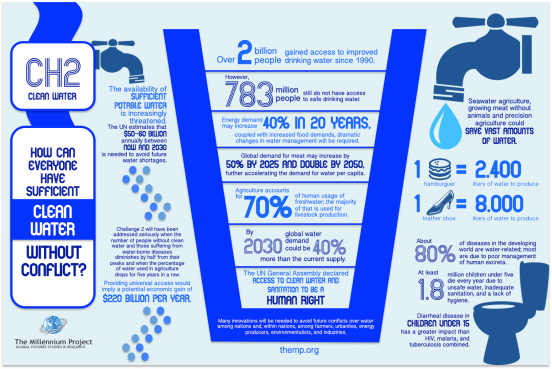 Image courtesy of The Millennium Project.

The hydrological cycle sees no borders or boundaries. Critical information to consumers and suppliers goes far beyond their jurisdictions. Streams and rivers do not obey the whims of political leaders or government organizations. Aquifers are not evenly distributed. The irresponsible actions of a corporation or community can harm others living thousands of miles away. Water is an unsubstitutable input factor in all spheres of human action and equally crucial to the maintenance of life, cleanliness and dignity. It is an economic good as well as a basic right. How and who should handle its sale and distribution is still contested and though ideologues have made forceful cases for their perspectives, history shows there is no single fit. Given the nonlocality and complexity of this issue, it is clear collective intelligence gathering, dissemination and analysis on the parts of far flung agents and agencies will bring the world closer to solving its crisis by taking into account the institutional, cultural, geographical and economic circumstances unique to each city and state.

As introductory science textbooks of various stripes like to point out, in a painfully obvious and redundant fashion (the authors do not seem to realize there is considerable overlap in their oft-repeated figures and sorry stabs at purple prose), most of the world’s water supply will not slake your thirst. At best it will dehydrate you, at worst it will kill you in a manner befitting a poorly produced horror movie. Demand for freshwater has tripled in the past half century and is increasing by 64 billion cubic meters a year. Yes, there are more people today than there were in 1965, but more bodies gives one an incomplete picture. Water is needed for manufacturing, by power plants, for the production of biofuels (between one to four thousand liters are needed to make one liter of biofuel), and agriculture. Of the most interest to the most people, with good reason, is how water is supplied in urban areas. Over fifty percent of people live in cities, yet in many areas, particularly impoverished ones, they do not have access to safe drinking water. First, the big picture.

John Anthony Allen, winner of the 2008 Stockholm Water prize, introduced the concept of virtual water. As mentioned, water is needed to produce a number of goods and foodstuffs. Some, like beef, require a disproportionate amount. Dry or crowded areas must import these items, thus indirectly depleting water from exporters. The United States is a prominent exporter of VW, whereas Japan is an importer. A number of countries receive a great deal of water or VW from their neighbors. This includes in particular Middle East and Africa, regions not famed for their stability. Due to the nature of VW some politicians could push for protectionist measures.  Moreover, the fact that certain lakes and rivers are shared means unexpectedly low amounts of rainfall will lead to tension between their claimants. Some, like Israel and Jordan, do not need much of a casus belli to not cooperate with one another. Others, like Bolivia and Peru, seem to have found a peaceful and stable agreement in the sharing of Lake Titicaca. Whether its hilarious name has anything to do with the amicability of those who draw from it is anyone’s guess. In developing nations the infrastructure and capital is not present to build projects of any scale and there is little incentive for companies or governments to promote universal access as a goal.

When foreign venture capitalists arrive, as the British company Biwater did in Tanzania in 2005, coverage may remain the same or shrink while prices rise. However, privatization and foreign capital may be opposed on environmental or nationalistic grounds, sometimes irrationally and―like in Cochabamba―violently. Between 1950 and 1973 grain production doubled, in part due to the use of fertilizers and partially due to the proliferation of irrigation techniques. Both of these necessary components of the Green Revolution have helped feed billions, but at expense of the quality and quantity of their own nourishment.

The hydrological cycle is a continuous process.  So while it is an impartial and sometimes fickle master, it is not a stingy one. George Annandale argues that groundwater, the primary source for municipalities, is unsustainable. Rather than serving as the de facto well for us all, rivers instead should be utilized to fi   Advances in boring machines allowed for farms and cities to be built in dry areas. Yet, as wonderful as this sounds, there is a catch: the residence time of a drop of groundwater varies from one to millions, on average around 1,400, compared to 14 to 18 days for any given drop swimming down a river.  He advocates the construction of reservoirs according to precise calculations. Yet his emphasis on intergenerational equity and his related disdain for the concept of “design life” seems to spring from, ironically, a profound lack of foresight. Dams should be accompanied by environmental impact studies, although many of the worries surrounding them are rooted more in emotion than in reason. Reservoirs must be carefully built and managed in order to prevent unwanted accumulation of silt, clay, sand and gravel. Sedimentation reduces their efficiency and eventually renders them useless as service stations and as storage units. Thus his solution is not practical for a substantial slice of the globe. Moreover, his bold claim regarding the comparative pointlessness of conservation can be contested. The foundation for this comes from his own acknowledgement of agriculture as the primary consumer of water and from biotechnologies that already exist.

Sparseness is not the same as absolute scarcity. There are socioeconomic factors that prevent billions of people in slum areas from access to safe and affordable drinking water. These humanitarian crises, however, rarely spring from federal laws and regulations, but mismanagement at the municipal level. Those in favor of privatization argue governments are inefficient and have no accountability. Their opponents contend the profit motive compels companies to pollute, cut corners whenever possible, have no incentive to service the poor, are willing to export it to the highest bidder and are ultimately more costly to taxpayers thanks to higher rates.  Moreover, Karin Bakker, author of a brilliant and balanced examination of subject, reminds her readers that the word is often misunderstood in the context of water systems. It may mean the infrastructure is owned or operated by a company. It may also mean some amount of labor is outsourced to the private sector. She also notes that while absolute scarcity does exist in some regions, “in many instances, sufﬁcient volumes of water are available but are inappropriately exploited, wasted, and distributed.” In Jakarta privatization led to the emergence of “microtreatment plants” in response to increased prices. Residents also resorted to small wells, rainwater and filling plastic bottles fished from local waste dumps. While free market warriors may applaud this sort of spunk induced by the survival imperative, it is neither moral nor sanitary. Moreover, while these providers are responsible to their customers if they make them ill immediately with cryptosporidium or E. coli, pollutants can take months or years to manifest as diseases. Universal coverage, even in the face of abundance, is a distant dream. In poorer areas governments do not have the means and companies do not have the incentive to make the initial investment in infrastructure.

Whether one believes in linear anthropocentric climate change or believes fluctuations temperature and rainfall, however dramatic, are merely cyclical, it is clear any changes for any reason can aggravate an already delicate situation. Famine and drought, history tells us, are not fun to experience. Agriculture, which pollutes more than its fair share of water, also guzzles it by the gigagallon. Accounting for 71% of worldwide water use, any optimizations or alterations in the way crops are raised and meat is produced could drastically reduce our ecological footprint. While it only takes a 1000 liters of water to harvest a kilogram of wheat, it takes 16,000 liters to put a 2.2 lb steak on your plate. This situation is far from hopeless, however. Before diving into disruptive technologies, it is best to first turn to the international and urban environments. Demand hikes have led to the draining of wetlands. While the ramifications are not immediate or noticeable on a small scale, or should not seem so if one does not care about the little fishies, birdies and alligators, it should be be concerning since forests and wetlands play an crucial role in purifying water. Moreover, they save us the time and trouble required to put together purification facilities.

Halophytes represent about 2% of plants, however they can be found in half of the higher plant families. In other words, salt tolerance has been evolved by many unrelated species. They “yield 10 to 20 ton/ha of biomass on seawater irrigation”, neck and neck with their freshwater cousins. One oilseed halophyte, S. bigelovii, contains 28% oil and 31% protein, quite competitive with soybeans. With the proper monetary incentives, which the market may provide, staple crops may, through the wonders of modern molecular biology, be converted into halophytes. Desalination is often cited as a cure to the world’s thirst and held up as if all other alternatives are madness. As desalination is refined perhaps it will be a feasible supplement, or in some locations, alternative to aquifers or rivers, but at this time its appetite for electricity and its excretion of saline waste makes it unattractive to all but the most parched seaside cities. In vitro meat is quickly become less expensive to produce and pressures exerted by profitability as a substitute to four-legged flesh depots will undoubtedly lead to an explosion of research in the area. Nanoremediation and bacterial-mediated cleaning are two other viable options for reclaiming the vast amounts of water that has been made unusable by the skyrocketing demands by modern consumerist societies.

Nanoparticles can be designed to deal with particular pollutants. For instance, as I reported in an article originally published by NanotechNow, “Dr. Sujoy Das assembled a silica-silver nanocomposite via biosynthesis. In other words, its production is cheap and green. The proteins covering the nanoparticles prevent them from leaching into the water. They also function as both reducing and protective agents for the silver nanoparticles. The nanocomposite removes dyes and microorganisms quickly. Moreover, the material can be reused several times.” This is an example of how nanoparticles can be helpful even by researchers and engineers strapped for money and resources.  At the University of Aberdeen a technology is being developed in which “a photoelectrocatalyst is mounted into an electrochemical cell; when it reacts with light, the catalyst interacts with any organic matter in the water, oxidizing them across the catalyst’s surface.” Turning contaminants into electricity is a dream come true. Hopefully the (occasional) low costs of production will allow people around the globe to use these technologies on microtreatment plants, rainwater barrels and in communal wells.

There are no quick fixes to the water crisis. Yet by taking a systems approach, utilizing collective intelligence, empowering individuals with information and technology, and creating incentives for the sort of technologies needed to effectively end the crisis altogether, we need not consider falling precipitation rates a death sentence for our species.