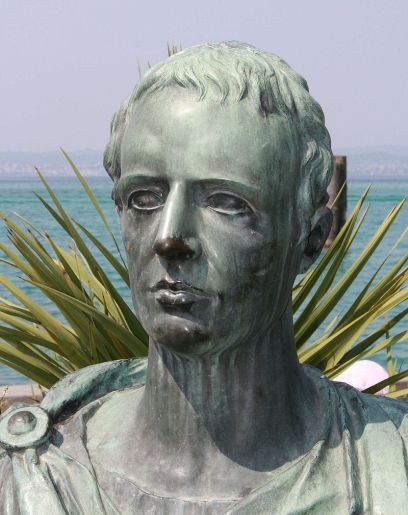 Little is known about the life of the Roman nobleman Gaius Valerius Catullus. He lived during the late Republic, befriended many prominent people, and fell in love with a woman posterity knows only by the name he gave her. Enamored with the poetry of Sappho, he created the ultimate tribute to his major inspiration by naming his desideratum Lesbia.

Even within the field of Latin literature Catullus has never been considered as canonical an author as Virgil or Horace, and rightly so, but for someone interested in the culture of ancient Rome it may be better to enjoy Catullus’s insults than to study the idealized epics and odes of other poets. While Virgil, the infamous perfectionist, slaved away at his epic, Catullus cheerfully composed verses that reveal life as it was during the exciting times of the First Triumvirate. From the insult culture of this period emerged a poet who refined the art of satire and laid the foundations for modern poetry.

Like the poets of the twentieth century, who turned away from traditional conventions and structures, Catullus also found the classical forms prohibitive and pompous. He knew he could not imitate Homer, and he did not try. Urbane Romans undoubtedly found Apollodorus and the other Homer-imitators of the Hellenistic era as insufferable and derivative as modern scholars. Catullus is indisputably irreverent, but never condescending. He did not have the sublime streak of genius that separates the likes of Shakespeare, Goethe and Cervantes from the chaff, but his work displays substantial range and depth.

In one poem he may ruthlessly attack the femininity of Thalus or mercilessly mock Furius’s destitution, but in others he declares his undying love for Lesbia or provides consolation to the grieving Calvus. The poet who teases his impecunious friend also writes haunting verses: “Odio et amo. Quare id facem, fortasse requires?/Nescio, sed fieri sentio et excrucior.” (1-2) This translates to: “I love and yet I hate. Why do I do this, you wonder? I do not know, I can only feel it and I am in agony.

For further proof of substance one can look to his twenty second poem, wherein his critique of Suffenus’s delusions also serves as a critique of human nature. He anticipates Freud when he eloquently reminds his reader that “everyone is assigned his own delusion” (20). He is a scathing polemicist, but he is acutely aware of the universality of human vanity, and this prevents his tone from ever veering into didacticism. Moreover, his works do not contain any lengthy allusions to the alleged morality of the early Republic or dull idealizations of rural living.

It should be noted here that Catullus occasionally utilized classical forms, but it should also be noted that these poems are hardly representative of the rest of his work. Imitation is part of every writer’s initiation process, and while there are tidbits of interest in pieces like “Of the Argonauts”, they have not exerted a significant influence on Western literature. Catullus’s mocking style paved the way for Juvenal and Martial; it is not outlandish to claim the modern tradition of satire begins with him. Callimachus was a major influence, but his subjects and the way he dealt with them were quite different. One could call the Greek Menander as well as the Roman playwrights Plautus and Terrence forerunners, but Catullus is not writing plays, he is painting portraits in verse. He cultivated a potent minimalism that was not rediscovered until the late 19th century.

Catullus is not as shocking as he may seem when historical context is taken into account. He belonged to a culture in which it was acceptable to launch ribald personal attacks against one’s political enemies. The art of the ad hominem was proudly practiced by respected statesman like Cicero, who, although familiar with Aristotelian logic, found it perfectly reasonable to luridly describe the alleged lasciviousness of his foes. The political atmosphere inspired some of his most caustic remarks. He has no love for Caesar or Pompey. He refers to the latter as the “sodomite Romulus” (5) and refers to both Caesar and Mamura as “abominable sodomites, fellators.”(1-2) It is not surprising that he would be at odds with aspiring dictators like Caesar and Pompey. Although, he does not condemn all politicians; he has only good things to say about Cicero.

He is a citizen of a multicultural empire, yet he is acutely aware of the differences even between Italian peoples. He writes of “Sabinus aut Tiburs aut pinguis Umber aut obesus Etruscus”—“If you were a city man or a Sabine or a Tiburnan/or a thrifty Umbrian or a fat Etruscan/or a swarthy or toothy Lanuvian or a Transpadane(11). Yet seemingly in the same breath he speaks of Syria, Libya, Persia, and Britain as if they merely down the road. Despite its sprawling, all-encompassing nature, the Roman Empire was not devoid of racial or religious distinctions. This isn’t a stunning revelation, but because of the tolerance Rome normally displayed towards different races and religions it is sometimes easy to forget these distinctions still existed.

Catullus’s musings on religion give us a glimpse into Roman attitudes towards the Gods around this time period. He  calls Persian religion “impious” when wryly prophesying that a Magi will be born from the union of Gellius and his mother. At another time he calls his own gods “hostile.” One needn’t be an expert to know the Greco-Roman pantheon was not composed of the most caring of deities. It’s easy to see how, when faced with a cruel universe, the citizens of the Roman Empire sought refuge in religions that made better promises than everlasting mindlessness as a shade in the underworld.

While it is only possible to speculate based on the evidence available, one could convincingly argue that Catullus, like many other wealthy Romans, was an Epicurean. His disdain for religion and lack of sexual inhibitions could certainly lead one to that conclusion. It is likely that he did not adopt a formal philosophy or religion. He was, like Cicero, a philosophical eclectic who refused to chain himself to a single school. Modern poets, whether they know it or not, have either been directly or indirectly influenced more by this bawdy satirist than his more illustrious contemporaries. Their unpretentious content and terse approaches to the art are tributes to a relatively minor poet, a poet that many of them have never read or even heard of. Catullus, modest as he was honest, would be very amused by this state of affairs.