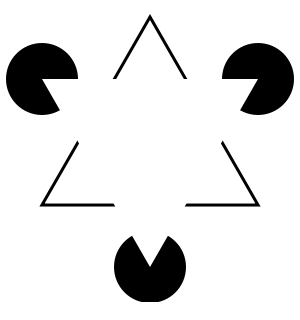 The Kanizsa Triangle, an illustration of Gestalt psycology in action.

There is no evil without some good.

This proverb should not be interpreted as blind Panglossianism. That sort of naive optimism is antithetical to the Greco-Roman worldview, which itself was far from homogenous. It is hard to imagine a Stoic, Epicurean, Skeptic, Neoplatonist, Aristotelian, or a run-of-the-mill Pagan trading places with Voltaire’s ridiculous professor (teleology is not the same as believing this is the “best of all possible worlds”). Minor mishaps help us prepare for more formidable disasters. Catastrophes may force us to change by giving us a deeper appreciation for our lives and life itself.

This does not mean we should subject ourselves to hardships, it does not mean it is “for the best” when a monsoon obliterates  a village or a tyrant is given absolute power or a loved one passes away, but these sorts of calamities, whether it is the strengthening of a resolve for liberty, the bonds of family and community, or the expansion of one’s empathy, do not come without some good – which is all that is being claimed here. Since at this point in time tragedies are unavoidable, it is wise to draw what we can from this maxim and apply it to our own typically less-than-ideal circumstances.

The world wants to be deceived

And maybe the ultimate deception is the need to construct coherent narratives. As Postmodern as this may sound I am not denying the existence of objective facts, the usefulness of the scientific method, or the validity of properly applied deductive logic. I am simply saying there is a universal need – shared even by Postmodernists – to believe we have a consistent and complete picture of the areas we consider important enough to demand this sort of self-deception. The shadows, what Donald Rumsfeld called the “unknown unknowns”, greatly outnumber the other three types of knowables.

Optimism is practical. Occasionally bolstering one’s faith in Lady Luck or Providence is not wholly irrational, since it is likely these terms are  describing a set of very real traits and circumstances working in one’s favor. Pessimism is easy to fall prey to because we are wired to give more weight to negative events, which only assists in constantly amplifying the bias (and engorging the smugness of the pessimist). There is even a special sort of satisfaction in complete agnosticism, partially because it requires so little effort and partially because it often seems like the wisest position to take.

Gestalt psychologists like Max Wertheimer and Wolfgang Kohler found that people are very good at “filling in the blanks”, sometimes to their detriment. It is described in the approriately titled Law of Closure. In a way, pretending to know what is between the gaps is an essential form of closure in both senses of the word.

A good name is better than vast riches

As the information age matures everyone will become increasingly accountable for their actions and, more controversially, their beliefs. Beliefs in some way must be reflective of the person who holds them. Yes? This means someone who holds a specific idea must be entirely evil and therefore deserving of condemnation.  Yet the belief has an origin, likely quite mundane and fairly arbitrary, because there is never an effect without a set of causes behind it (I seem to be channeling Aquinas this morning – bear with me). As I have argued  before, beliefs are rarely the result of critical thinking.

When a person can be beheld as a whole, how do we judge them? Usually not as a whole. It takes too much time and energy to properly evaluate someone’s character. Names rise and fall with sound bites, with incidents that suddenly dim public perception. Surely we all enjoy sharing the triumphs of those we consider representative of ourselves and our values, but nothing is relished more than the fall of the mighty. Care must be taken not because there is so much information, but because a single speck, even if it is only a speck in the eye of one vicious critic, can irreparably damage a legacy.

A liar should have a good memory.

In different states of mind we can more readily access different memory clusters. Anyone who has been intoxicated, hypnotized, or has utilized the Stanislavski Technique knows this.

In some way or another we are liars, either by omission (to protect our reputations or spare the feelings of others) or by stating things we know are untrue. Even in the latter case the lies may not be malicious or harmful. Most of us would never tell a child he or she is stupid, even if, as far as we can tell, they are quite stupid.  Someone who constructs a false narrative must remember all its details, otherwise they are bound to be convicted, but the same can be said for someone who is trying to tell the truth.

Yet, as George Costanza said, “a lie is not a lie if you believe it.” Memories must seem true, otherwise one’s recollections will be unconvincing.

It is unfortunate to have no enemies

This one is open to interpretation. At first glance it looks like a joke, maybe something a politician once said to lighten the mood of a banquet. On the other hand, it expresses a sentiment older than Rome, older than our species. Rats roughhouse with one another and so did, presumably, our rodent-like ancestors. This bouts are not being waged between two “enemies”, although it would also be silly to claim the rats are friends. There is an instinct to play.

“What we call ‘mastery’ can be defined as that mysterious process through which what is at first difficult or even impossible becomes easy and pleasurable through diligent, patient, long-term practice.”

While many people have contentedly striven for mastery without paying much attention to their rivals, or the world outside their studio or office, there is no doubt competition is a necessary incentive for practitioners who would otherwise see no point in continuing. Even Leonard, who takes a rather spiritual view of mastery, must admit that a game without challenge is incredibly boring.